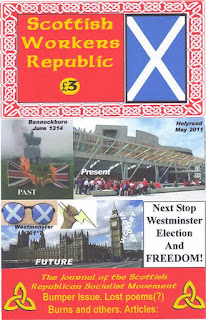 Hi All
The latest edition of the Scottish Workers Republic the journal for the Scottish Republican Socialist Movement is now available for purchase. This is a bumper 32 page post election special and articles include The Crisis of Capitalism: Towards a Republican Scotland - Gerry Cairns, Cultural Imperialism - Eric Canning, Lessons From the Tragedy in Libya - Peter Urban, On The Brink - Brian Quail, Hono...uring the Scots who Fought Franco - Stephen Coyle, James Connolly 1868-1916 An Unrepentant Socialist - Dr James D Young (this is a taster for his forthcoming book which will be in print soon), There is an article by Jim Clayson which looks at the possibility that he has uncovered another lost work by Robert Burns titled "To Lord Chief Justice Eyre" as well as an article relating to the Proscripton Act of 1746 which was written by Alexander MacDonald 1700-1770 who joined the Jacobite Army in 1745 and was appointed to teach Gaelic to Charles Edward Stuart. The poem is in Gaelic and English.

This edition has lots lots more, buy your copy now £3 + P+P from the SRSM, P.O. BOX 16887, GLASGOW, G11 9EP , SCOTLAND. Please make cheques / postal orders out to SRSM, payment can also be made via PAYPAL our payment address is -
info@scottishrepublicansocialistmovement.org
UK postage is £1, Europe £2, Rest of the World £3

The Society of William Wallace

This website was built with Webnode
You can also have an impressive website for free!
Try it out